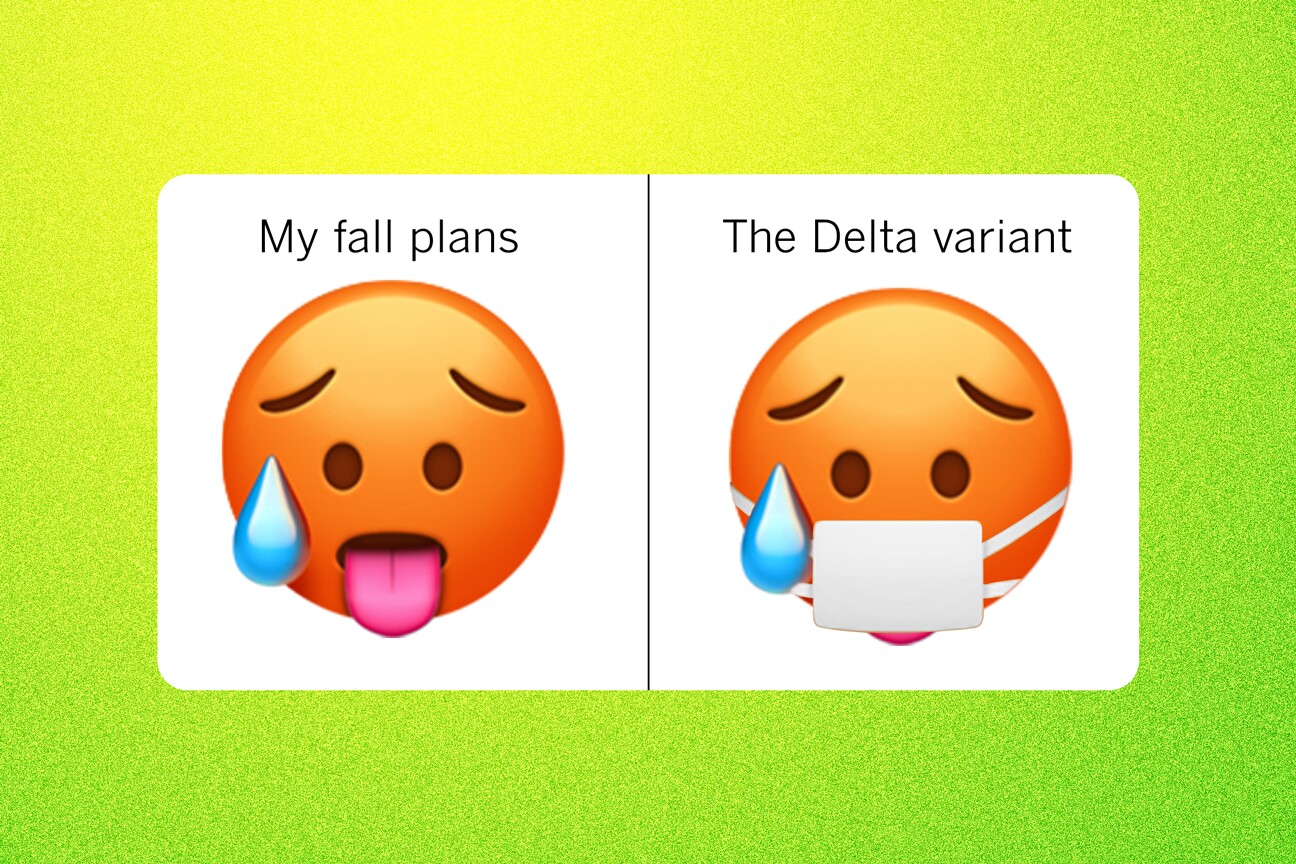 Fall came fast. The Delta variant came even faster. And then, of course, came the memes.

They started creeping up on Twitter early last week: two pictures side by side of something perfectly good, usually from popular culture, and the nemesis of that thing — the thing that put a wrench in it, endangered it or ended it completely. “My fall plans” reads the text above said good thing; “The Delta variant,” above said bad one.

The template was quickly replicated on meme generators and shared widely on Instagram. As the days went on, they became more niche or culturally specific. Many were darkly funny. Others, in a sign of the times, just plain dark.

“My fall plans,” read the words above a picture of the Tejano singer and icon Selena Quintanilla Pérez, with “The Delta variant” above an image of the woman convicted of murdering her, Yolanda Saldívar (this obviously being one of the dark examples).

“My fall plans,” read the words above a picture of 3-inch-long acrylic nails, with “The Delta variant” above an image of a pull-tab can.

“My fall plans,” read the words above a picture of a Royal Dansk Danish Butter Cookies tin in a tweet by Times contributor @Carlos_Film, with “The Delta variant” above an image of the tin with a sewing kit inside.

“My fall plans,” read the words about a picture of LeVar Burton in a tweet by @ConStar24, with “The Delta variant” above an image of new (and controversial) “Jeopardy!” host Mike Richards.

“My fall plans,” read the words above a picture of a young Al Green, with “The Delta variant” above an image of hot buttered grits (in reference to the time in 1974 that Green’s ex-girlfriend poured piping-hot grits on his back while he was in the bath, before ending her own life.) Again, dark!

You get the point.

The memes resonated because they deftly illustrated the way in which hope was dangled in front of us. And the ways our collective hope for a mask-less life — filled with dancing, kissing and eating out again — was hijacked by the Delta variant, which we quickly learned was highly infectious and easily transferred, even among vaccinated people, but four times more likely among the unvaccinated. It was like a balloon deflating in front of our eyes.

On Saturday, Los Angeles County health officials reported 4,229 new COVID cases and 21 related deaths. Last month, L.A. County reinstated its mask mandate for indoor spaces, and this month, L.A. officials made a move toward requiring people to have at least one dose of a COVID-19 vaccine before entering indoor venues like restaurants, bars, gyms and movie theaters.

A hot-face emoji summer turns into a Delta fall in the blink of a new guideline. And to process the grief, the internet did what the internet does: made jokes.

The site knowyourmeme.com reported that the trend was started on Aug. 8 by @jush_for_fun, who referenced an iconic upset from the “RuPaul’s Drag Race” canon. It’s since been tailored to be subculture- and even regionally specific — and there is no shortage of hypothetical fall plans this could be applied to for Angelenos.

Like maybe you got tickets to see Burna Boy at the Hollywood Bowl on Oct. 8 and now, sitting among thousands of people as they sing along to “Ye” without masks on is a stressful thought.

Or you’re a Virgo, Libra or Scorpio and were planning a fab fall birthday outing somewhere festive like Hamburger Mary’s, La Cita or Akbar after spending last year’s in deep pandemic. Do you make that reservation, send the group chat invitation, buy that birthday tiara or do you … not?

Let’s say you have a long overdue picnic at Vista Hermosa Park with your work friends on the calendar. Where early in the summer you might have sat close, eaten from the same cheese plate, whispered WFM drama into one another’s ears over foam cups of wine, now even the thought feels illegal.

Then there are those who were finally, for the first time in over a year, going to get out of L.A., get on a plane, maybe see their parents who live in another state or check a destination off their bucket list. Miss Delta said, “Psych!”

But for a fleeting few days, they were a way to channel our anxiety around the fact that just when we were getting our hope back, it was snatched by rising case numbers and a dramatic shift in vibe. They helped us find humor in the realization that we’re not as much in the clear as we thought we were, the possibility that life may very well be put on pause again for a while, or worse, that the virus is just going to keep mutating and dictating the way we live our lives for years to come. (Ha! Ha! Ha! Funny, right?!)

And sometimes, after you’ve taken every precaution imaginable, panicked about every possible scenario and gone through the five stages of grieving your fall plans, all you can do is laugh.

Emma Raducanu says she hasn’t decided how to spend her £1.8million...