Earthquake hits Rome as the city emerges from coronavirus lockdown

By Chris Pleasance for MailOnline and Afp

A mild earthquake shook Rome on Monday morning as the city tries to adjust to life following coronavirus lockdown.

The quake had a magnitude of 3.3 and struck at 5.03am with an epicentre in Fonte Nuova, a small town around 10 miles outside the capital.

Firefighters said they had received numerous inquiries from people who had been shaken awake, but no reports of damage or injuries. 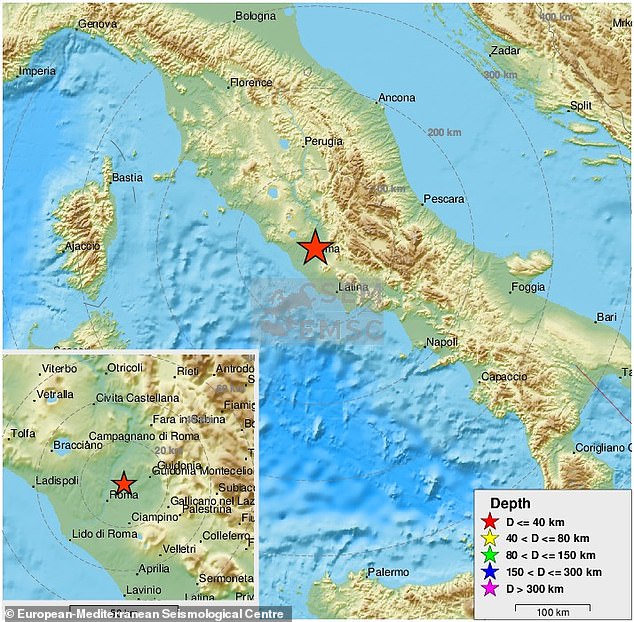 An earthquake of magnitude 3.3 struck Fonte Nuova, 10 miles north of the Italian capital, at 5.03am on Monday – prompting calls to fire services but no reports of injuries or damage

Rome is not directly situated in a zone of strong seismic activity, but stronger earthquakes in neighbouring regions have often been felt in the city.

In 2016, a major earthquake with a magnitude of 6.2 struck the Umbria region of central Italy, killing 299 people and injuring hundreds more.

The quake was followed by at least 200 aftershocks which caused buildings – some of which are hundreds of years old and built without protections – to collapse.

Despite the epicentre being in the town of Norcia, 100 miles from Rome, the quake was felt in the capital.

In 2009 a similar quake hit the medieval town of L’Aquila, in Abruzzo province which neighbours Rome, causing widespread destruction.

Italy is one of Europe’s most seismologically active countries, and contains the continent’s only active volcanoes – Etna, Stromboli and Vesuvius.

This is because a major fault line where the Eurasian tectonic plate and African plate meet runs down the middle of the Mediterranean Sea, close to southern Italy.

Smaller fault lines then run up the centre of the country, largely following the Apennine Mountains which form the geological ‘spine’ of the country.

As tectonic plates are shifted around on currents in the Earth’s liquid magma core, they rub against one another creating friction which can be felt as earthquakes.

While such quakes are typically mild, major shifts between the plates which occur at regular – but hard to predict – intervals can cause devastating and deadly tremors.

A 90 Day Fiancé: Before the 90 Days Meeting 7 Years Coming

Adam Lambert Talks New Version of Queen’s ‘We Are the Champions’...

They brought L.A. street culture to the boardroom and Netflix