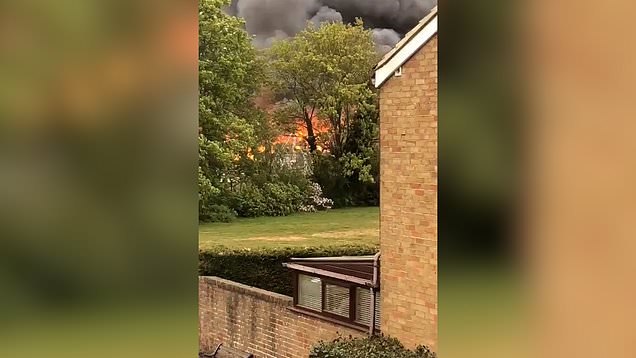 A huge fire has broken at an industrial unit on a River Thames island, causing massive clouds of grey smoke.

The blaze started at Platt’s Eyot, in Hampton, shortly after 5pm, with witnesses claiming to have heard ‘explosions’ coming from the area. Some locals were said to be attempting to rescue boats moored on the island.

Crews from eight fire engines are currently battling the flames, with the London Fire Brigade confirming that there were ‘some cylinders’ involved in the blaze.

No injuries have so-far been reported, and the incident has been described as ongoing.

Local blog The Hamptonite described the fire as ‘gigantic’. It said: ‘Police/fire moving people back. Lots of bangs and pops. The fire is a long way from the road, surrounded by river.’

A spokesperson for Surrey Fire and Rescue Service advised nearby residents and businesses to close their windows and doors.

They added: ‘Our Joint Fire Control received 20 calls to Hampton Boat Sheds this evening. We are currently assisting London Fire Brigade at this incident.’