‘My aim in life? Success: fame or even notoriety’: Oscar Wilde’s witty answers to questionnaire while he was still a student at Oxford set to go for £60,000 at auction

By Tom Pyman For Mailonline

Oscar Wilde’s witty answers to a questionnaire while still a student at Oxford are set to go under the hammer for £60,000.

The writer claimed his aim in life was ‘success: fame or even notoriety’ among many other witticisms in Robert Saxon’s Mental Photographs – an album for confessions of tastes, habits and convictions.

It makes up part of a collection being sold by Steven Berkoff, the actor and director known for his work in Salomé, Rambo: First Blood Part II and the James Bond film Octopussy. 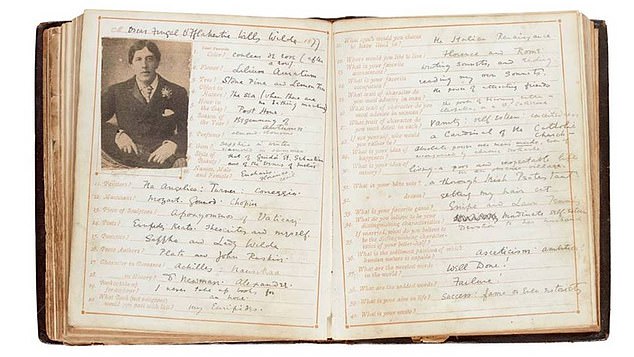 Oscar Wilde claimed his aim in life was ‘success: fame or even notoriety’ among many other witticisms in Robert Saxon’s Mental Photographs – an album for confessions of tastes, habits and convictions

The witty answers of Oscar Wilde, pictured let, make up part of a collection being sold by Steven Berkoff, pictured right, the actor and director known for his work in Salomé, Rambo: First Blood Part II and the James Bond film Octopussy

‘I have nothing to declare but my genius’: The wit of Oscar Wilde

The son of two Anglo-Irish intellectuals, Wilde studied at Oxford before moving to London where he mixed with the capital’s most fashionable circles and began a career as a writer.

He is perhaps best known for his play The Importance of Being Ernest, which was still being staged in London’s West End when he was arrested on charges of sodomy and gross indecency.

He wrote only one novel, The Picture of Dorian Gray published in 1891. In prison, he wrote De Profundis, a long letter discussing his trial and subsequent jail sentence.

When Wilde was released he had undergone a transformation, and was no longer the pleasure seeking socialite. He went into exile in France and died destitute in Paris at the age of 46.

Today he is fondly remembered for his razor sharp wit and brilliant quotes.

On arrival in the USA he is once said to have breezed through customs announcing: ‘I have nothing to declare but my genius’.

Other memorable quotes include: ‘There are only two tragedies in life: one is not getting what one wants, and ‘We are all in the gutter, but some of us are looking at the stars’.

Even on his deathbed he was said to have quipped: ‘Either those curtains go, or I do.’

The two-page questionnaire, dated 1877, when the writer was in his early twenties and yet to publish a book, sees him posit his thoughts on 39 topics, and is signed at the top ‘Oscar Fingal O’Flahertie Wills Wilde’.

The idea behind Mental Photographs was, as noted in the ‘Preface’, to provide ‘a record for the tastes and characteristics of friends; in short, for their mental photographs…’

Auction company Sotheby’s says his responses ‘sparkle with the author’s characteristic ebullience and many are perfect Wildean epigrams’.

His idea of happiness was written as: ‘Absolute power over men’s minds, even if accompanied by chronic toothache’ and his idea of misery was ‘Living a poor and respectable life in an obscure village’.

Although at the time unmarried, Wilde chooses to respond to the question ‘If married, what do you believe to be the distinguishing characteristics of your better-half?’ with ‘Devotion to her husband’.

Previously exhibited at The British Library and at the Petit Palais, the auctioneer describes the item as ‘a revealing insight into Wilde’s early presentation of himself’.

Other highlights from Mr Berkoff’s collection include a copy of The Picture of Dorian Gray, as well as the first English edition of Salomé, one of 500 copies, with the first appearance of Aubrey Beardsley’s famous illustrations.

The sale also features a highly important 16 page autograph letter signed to George Alexander, the manager of St James’s Theatre, in which Wilde outlines the plot of The Importance of Being Earnest.

This letter comprises the first scenario for the play and provides a remarkable insight into the early development of Wilde’s final comic masterpiece.

It clearly shows how the core plot and structure were already formed before Wilde began the first draft and provides a remarkable early view of the play.

Wilde describes a first act, for example, in which Bertram Ashton (Jack/Earnest Worthing) admits his double life to his friend Lord Alfred Rufford (Algernon Moncrieff): ‘he has a ward etc., very young and pretty. That in the country he has to be serious etc.

‘That he comes to town to enjoy himself, and has invented a fictitious younger brother of the name of George – to whom all his misdeeds are set down.’